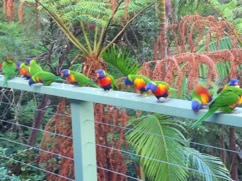 I’m struck by the variety of bird life that surrounds my home. Maybe it’s the warmer weather making them more jovial.

Here’s a photo of a couple of Brush Turkeys that roam our street. Some days I see one, two, three or all four of them. Often in the mornings we do a zig zag ‘dance’ down the road on my way to work. Sometimes they get curious and come up to the kitchen door.

Then there are the Lorikeets and Rosellas which I can set my watch by (8:15am weekends). They are quite the attention seeking entertainers and bob up and down along the balcony chirping away, demanding food and fresh water in the birdbath on the deck.

There are the Kookaburras that compete with the Sulfur Crested Cockatoos when it comes to volume and lately the magpies have appeared in greater numbers.

When I was five years old I was attacked by a magpie in our local park. I was going to retrieve some cutlery we’d left behind after a picnic during Spring school holidays. It turned out I’d walked right under a nest and the mother was protecting her young. Fair enough too, yet some 30+ years later I still flinch at the sight of magpies above head height. Which is a shame as they are actually one of my favourite birds to watch and listen to. Can’t go wrong with black and white. 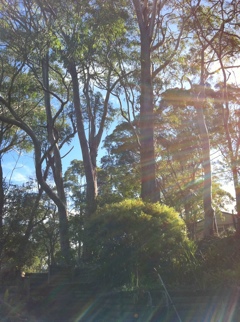